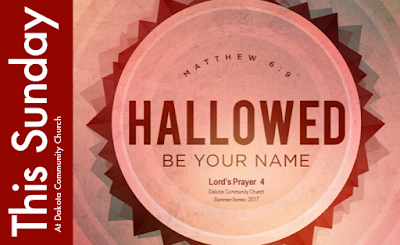 It is popular in our time to avoid clear delineation in favour of less-offensive generalizations. The oft repeated “I’m spiritual, not religious” is a prime example of this. “Spiritual” is hard to nail down, it’s blurry around the edges and could mean almost anything. Picture Oprah smiling and nodding her approval. “Religious”  on the other hand is easily defined. Which religion do you practise? At once a concise understanding emerges; sanctuaries, bibles, worship styles, prayers, and observances all come clearly into view.

In teaching the disciples to pray, Jesus was precise regarding Who we are praying to and how His name is to be treated. Our prayers need to reflect that precision.

I hope you will all join me this holiday weekend as we continue our series on the Lord’s Prayer with a message entitled “Hallowed Be Your Name”.

Pastor Dan
Posted by Dan Cormie at 4:45 AM No comments: 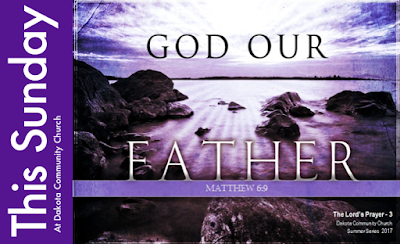 This Sunday morning at DCC we continue our series on the Lord’s Prayer with a message entitled “God Our Father”.

The Bible has much to say about the human condition and the various ways that sin has permeated and perverted it. “Incurvatus in se” is the Latin phrase used perhaps first by Augustine of Hippo and later by Martin Luther to describe our sinful state as “man curved inward on himself" rather than outward toward God and others.

In teaching His disciples to pray, Jesus confronts this selfish tendency head-on by directing them/us to pray “Our Father” rather than the more-natural-feeling “My Father”.  All alone in my prayer closet it seems silly to be using the plural form. Am I not seeking forgiveness for my sins, deliverance from my temptations, and most importantly the provision of my daily bread? Isn’t it Jesus who instructs us to secure our own breathing apparatus before trying to help others in the event of a loss of cabin pressure? Like it says, “God helps those who help themselves”, right?

Pastor Dan
Posted by Dan Cormie at 8:06 AM No comments: 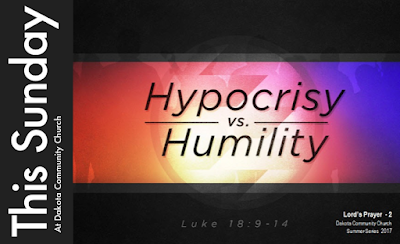 This Sunday morning at DCC we continue our series on the Lord’s Prayer with a message entitled “Hypocrisy vs. Humility”.

In the parable of the Pharisee and tax collector in Luke 18 Jesus ignites a religious revolution with the utterance of a single sentence. “I tell you, this man went down to his house justified, rather than the other.”

From our vantage point 2000 years later the tendency is to view the Pharisees as the New Testament equivalent of the Axis of Evil from the modern war on terror. We forget that these men took the law most seriously, were trying hard to live righteously and saw themselves as worthy of God’s acceptance, especially when compared to the common folk.

Besides the shocking truth presented regarding justification this passage also illustrates two types of prayer, one correct and effective, the other not so much.

I hope you will join me as we investigate this revolutionary teaching.

Pastor Dan
Posted by Dan Cormie at 12:02 PM No comments:

VI. I ASK WHETHER YOU PRAY, BECAUSE NEGLECT OF PRAYER IS ONE OF THE GREATEST CAUSES OF BACKSLIDING

There is such a thing as going back in religion after making a good profession. People may run well for a season, like the Galatians, and then turn aside after false teachers. People may profess loudly while their feelings are warm, as Peter did, and then in the hour of trial deny their Lord. People may cool down in their zeal to do good, like John Mark the companion of Paul. People may follow an apostle for a season, and like Demas go back to the world. All these things people may do.

It is a miserable thing to be a backslider. Of all unhappy things that can befall a person, I suppose it is the worst. A stranded ship, a broken-winged eagle, a garden overrun with weeds, a harp without strings, a church in ruins, all these are sad sights, but a backslider is a sadder still. A wounded conscience-a mind sick of itself-a memory full of self-reproach-a heart pierced through with the Lord's arrows-a-spirit broken with the inward accusation-all this is a taste of hell. It is hell on earth. Truly that saying of the wise man is solemn and weighty, "The backslider in heart shall be filled with his own ways." Proverbs 14:14

Now what is the case of most backslidings? I believe, as a general rule, one of the chief causes is neglected private prayer. Of course the secret history of falls will not be know until the last day. I can only give my opinion as a minister of Christ and a student of the heart. That opinions, I repeat distinctly, that backsliding generally first begins with neglect of private prayer.
Bibles read without prayer; sermons heard without prayer; marriages contracted without prayer; journeys undertaken without prayer; residences chosen without prayer; friendships formed without prayer; the daily act of prayer itself hurried over, or gone through without heart: these are the kind of downward steps by which many a Christian descends to a condition of spiritual palsy, or reaches the point where God allows them to have a tremendous fall.

This is the process which forms the lingering Lots, the unstable Samsons, the innocent Asas, the pliable Jehoshaphats, the over-careful Marthas, of whom so many are to be found in the church of Christ. Often the simple history of such cases is this: they became careless about private prayer.

You may be vary sure people fall in private long before they fall in public. They are backsliders on their knees long before they backslide openly in the eyes of the world. Like Peter, they first disregard the Lord's warning to watch and pray, and then like Peter, their strength is gone, and in the hour of temptation they deny their Lord.

The world takes notice of their fall, and scoffs loudly. But the world knows nothing of the real reason. The heathen succeeded in making a well-know Christians offer incense to an idol, by threatening them with a punishment worse than death. They triumphed greatly in the sight of their cowardice and apostasy. But the heathen did not know the fact of which history informs us, that on that very morning he had left his bed-chamber hastily, and without finishing his usual prayers.

If you are a Christian indeed, I trust you will never be a backslider. But if you do not want to be a backsliding Christian, remember the question I ask you: DO YOU PRAY?
Posted by Dan Cormie at 5:40 PM No comments: Please join me this Sunday morning at Dakota Community Church as we begin our Summer Series for 2017 entitled “The Lord’s Prayer”.

I'm wondering what went through your mind when you first heard that the summer series at DCC this year is going to focus on the Lord's prayer? Was there any kind of stirring toward excitement? Did you immediately begin to anticipate a time of growth or maybe a rekindling of passion for what was once a central part of your life as a believer? No? Then perhaps your mind drifted back to that popular teaching on the subject from Larry Levy in the 1980s as you moaned, “Not that again?" I sincerely hope that you did not experience a rush of guilt followed by an angry bristling against memories of religious legalism and the accompanying manipulations.

Whatever your presuppositions, please choose to set them aside.
Salvation does not come because we pray, nor does it come apart from it. 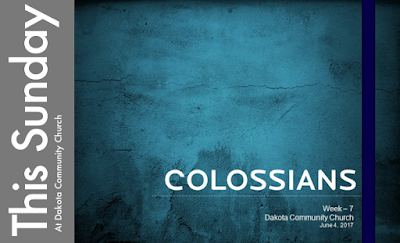 Please join me at DCC this Sunday morning for what is sure to be a wonderful time in fellowship and in the Word of God.

Adult Sunday School is being taught by Pastor Dan V. at 9 AM followed at 9:45 with pre-service prayer, coffee and fellowship time.

The actual service begins at 10:30 with worship, more fellowship, and finally, Joel Cormie will be continuing his current sermon series with week seven in the book of Colossians.

If you missed any of the previous messages in the series they are available along with all our past messages on the church website at www.dakotacommunitychurch.com

Hope to see you all there!